The Way of Defender

The skies and the future, the color is the same
It's black:
The land is in a swamp there is no way,
Dark falls on homeland. That's it. The end is on the way
Horned knights, they are coming soon
Their blades shine under the opaque moon
Enemy: they want to rule our motherland
Enemy: they'll take our treasure till the end
Enemy: they'll burn our homes and fields
Enemy: they came with war!
The land needs help, the people pray for it a lot:
All of a sudden lightning strikes from the sky. It's a marvel from the dark! 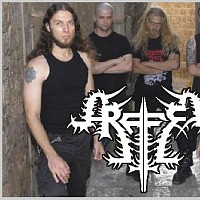 Teper priňať obrjad nastalo vremja.
Kak delali otcy tvoi.
Projti "postrig" ty dolžen smelo.
Smotri, c koňa ne upadi!
The crowd hails the little king
The steed was snorting beneath the prince
Forgotten sun brings back to us illumination
And Alexander revives lost hope of the nation
Have you enough strength to defeat the enemy horde?
Have you enough power to stay with the throne?

Lyrics was added by Andrew_Deer

Video was added by Andrew_Deer

The Way of Defender