Rap is stepping to me
They wanna get some
But most of them should go and try to boost their monthly income
Speaking over beats is the only time I feel complete
I don't hear the weak and I don't fear defeat
So what you got?
Connect the dots, I'll raise the pot
Remove the blood clot from the brain of hip hop
The name remains in tip-top shape
I'm still the back rapper scapegoat in the aim of their hate
I came in late, took a chair in the rear
But my classmates were well away how long I'd really been there
My peers have been held back for years, holding back the tears
Everybody knows our name like we was the cast from "Cheers"
So here's to the good times, tonight is mighty special
So fasten your seatbelts, cause I'm gonna launch this vessel
Ain't gonna land until I'm bigger than Espo
And bigger than ecstasy and bigger than techno 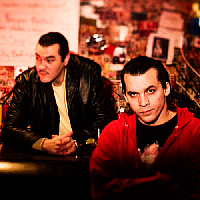 I wanna bigger than Jesus and bigger than wrestling
Bigger than the Beatles and bigger than breast implants
I'm gonna be the biggest thing to hit these little kids
Bigger than guns, bigger than cigarettes
A few years ago an ex-girl of mine
Asked me to keep her name out of my rhymes
So I said this rhyme that I'm about to say
It came from the heart and it went this way:
Go to hell girl, you make me sick!
I hope your new boyfriend gets cancer in his dick
What the fuck makes you think I'd put your name on my record?
Yeah, now I feel a lot better
You know what?
I ain't drank a forty since I became old enough to drink
Not caught up in what the fuck these people think
Cause when I die they're gonna find the missing link
But tonight I'm gonna rhyme it in the kitchen sink
I'm suprised more of y'all don't get hit by cars
Missing your surroundings, staring at the stars
I'm lonely without a woman that wants to spar
That's why I spent so much time in these bars
Drunk poolside, screaming, "Do or die!"
Looking at the water asking, "Who am I?"
Saw my reflection, Yes! I'm super fly!
And as you can guess again, I'm too damn high
[Chorus]
(What'd they say to you?)
But they said, "Drop dead."
I can't, I got a lot left
More than just another arrogant, asshole pot-head
In the top ten, who you love to hear on tracks
Smiling for the camera while I surf upon your ear wax
This beers flat and she kisses like a stripper
I'm coming to terms with my status as a drifter
Girl, I'm only in this town for one night
And these neon lights are keeping me distracted from my plight
I feel like a legend on a leash
Making an effort to break every piece that I can reach
Yeah, I got something to say, and even more to teach
But first let me scrape these feces from my cleats
Standing on the roof, complaining to the moon
The only time I tell the truth is when I'm naked in my bedroom
Soon I'm gonna reap the harvest of my struggles
But from now on, y'all can call me Sluggles
[Chorus]
Bigger than Jesus
Bigger than wrestling
Bigger than the Beatles
Bigger than breast implants
(x2)
Bigger than guns, bigger than cigarettes