The fog is rolling through the Docks - are dimly lit the only thought
To see it through the coming night. We caress the moonlight
They enslave us with their cross. Call us heathens in the mud
But they eat the flesh of their God, and they drink his blood
Our pagan stock is burning deep. The city watch is fast asleep
They tried to change our ancient ways. Now we set this town ablaze


Jump from the boat to the pier
Torches raised high, the howling breaks the sky
I can smell the fear in the air
As we surround the town and prepare to run it down
No help is going to arrive
Tonight we paint the ground red with Christian lives
Stare into his eyes, just before he dies
I can read the lies, cut him down to size
Send him screaming towards the light
photo 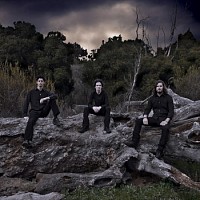 Look to the west and I can tell
Crusaders coming, to send us straight to hell
I try to spin my kin and turn us around
But the white stallions are already bearing down
Red crosses on silver shields
They spill our blood on the open fields
Steel blade on the rise, as my eyes go wide
Pitch black staring back, then his next attack
And I feel the sting, from the battle priest
I can't feel a thing, then I'm released
Drifting high above the sky
The Valkyrie won't let me die
She brings me to the tree of life
And the hall of the one-eyed god
He tells me "righteous son
You are not yet done
You have many gods
But they only have the one."
"So I send you back to fight
And to smite their wretched cause
Welcome your eyes to the sight
Of monumental loss."
Valhalla!
I will return
Once I fulfill my fate...
And I Awake.
Can you see the fields of war?
I open my eyes to crimson plains
And the heroes of pagan lore
Stake your claim, make your reign, and don't you miss
Strike them down, win the crown, of eternal bliss
Templar knight, you are mine, first you die, and then your shrine
Once you fall, I join the hall, of heroes slain
A chosen Thane
My spear flies true
Through the helm of a Templar knight
Follow me on her winged steed
To the heavens we will fight
Hell-bent we are charging deep
Whatever you can kill, you can keep
I can see the captain through the clear
A pagan sacrifice is drawing near
Tempered by archaic rage
I'm possessed by Odin's gaze
Berserk I run at the leading knight
Keen to end this with one preemptive strike
Legends tell of the champions of Midgard
The defenders of Nordic beliefs
The final breath of a blackened star
The Last Stand of the Pagan Kings