Up on the white veranda
She wears a necktie and a Panama hat
Her passport shows another face
From another time and place
She looks nothing like that
And all the remnants of her recent past
Are scattered in the wild wind
She walks across the marble floor
Where a voice from the gambling room is calling her to come on in
She smiles, walks the other way
As the last ship sails and the moon fades away
From Black Diamond Bay.


As the morning light breaks open the Greek comes down
And he asks for a rope and a pen that will write
"Pardon monsieur" the desk clerk says
Carefully removes his fez
"Am I hearing you right ?"
And as the yellow fog is lifting
The Greek is quickly heading for the second floor
She passes him on the spiral staircase
Thinking he's the Sovjet Ambasador
She starts to speak, but he walks away
As the storm clouds rise and the palm branches away
On Black Diamond Bay.
A soldier sits beneath the fan
Doing business with a tiny man who sells him a ring
Lightning strikes, the light blow out
The desk clerk wakes and begins to shout
"Can you see anything ?"
Then the Greek appears on the second floor
In his bare feet with a rope around his neck
While a loser in the gambling room lights up a candle
Says "Open up another deck"
But the dealer say "Attendez-vous, s'il vous pl it"
As the rain beats down and the cranes fly away
From Black Diamond Bay.
photo 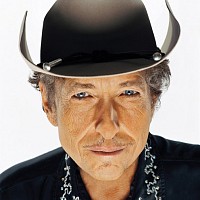 The desk clerk heard the woman laugh
As he looked around the aftermath and the soldier got tough
He tried to grab the woman's hand
Said, "Here's a ring it cost a grand"
She said, "That ain't enough"
Then she ran upstairs to pack her bags
While a horse-drawn taxi waited at the curb
She passed the door that the Greek had locked
Where a handwritten sign read, "Do not disturb"
She knocked on it anyway
As the sun went down and the music did play
On Black Diamond Bay.
"I've got to talk to someone quick !"
But the Greek said, "Go away" and he kicked the chair to the floor
He hung there from the chandelier
She cried, "Help there's danger near
Please open op the door"
Then the volcano erupted
And the lava flowed down from the mountain high above
The soldier and the tiny man were crouched in the corner
Thinking of forbidden love
But the desk clerk said "It happens every day"
As the stars fell down and the fields burned away
On Black Diamond Bay.
As the island slowly sank
The loser finally broke the bank in the gambling room
The dealer said "It's too late now
You can take you money, but I don't know how
You'll spend it in the tomb"
The tiny man bit the soldier's ear
As the floor caved in and the boiler in the basemen blew
While she's out on the balcony where a stranger tell her
"My darling je vous aime beacoup"
She sheds a tear and then begins to pray
As the fire burns on and the smoke drifts away
From Black Diamond Bay.
I was siting home alone one night in LA
Watching old Cronkite on the seven o'clock news
It seems there was an earthquake that
Left nothing but a Panama hat
And a pair of old Greek shoes
Didn't seem like much was happening
So I turned it off and went to grab another beer
Seems like every time you turn around
There's another hard-luck story that you're gonna hear
And there's really nothing anyone can say
And I never did plan to go anyway
To Black Diamond Bay.

Lyrics was added by iadaew

Lyrics was corrected by NightHorizon

Video was added by NightHorizon