I Shall Be Free - lyrics

Well, I took me a woman late last night
I's three-fourths drunk, she looked uplight
She took off her wheel, took of her bell
Took off her wig, said, "How do I smell?"
I hot-footed it... bare naked ...
Out the window.


Well, sometimes I might get drunk
Walk like a duck and stomp like a skunk
Don't hurt me none, don't hurt my pride
'Cause I got my little lady right by my side
(Right there
Proud as can be)
I's out there paintin' on the old woodshed
When a can a black paint it fell on my head
I went down to scrub and rub
But I had to sit in back of the tub
(Cost a quarter
And I had to get out quick...
Someone wanted to come in and take a sauna)
photos 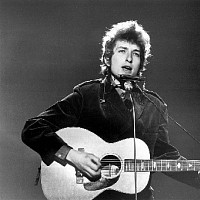 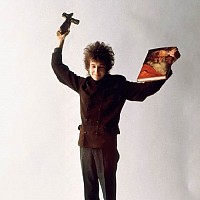 Well, my telephone rang it would not stop
It's President Kennedy callin' me up
He said, "My friend, Bob, what do we need to make the country grow"?
I said, "My friend, John, "Brigitte Bardot
Anita Ekberg
Sophia Loren"
(Put 'em all in the same room with Ernest Borgnine!)
Well, I got a woman sleeps on a cot
She yells and hollers and squeals a lot
Licks my face and tickles my ear
Bends me over and buys me beer
(She's a honeymooner
A June crooner
A spoon feeder
And a natural leader)
Oh, there ain't no use in me workin' so heavy
I got a woman who works on the levee
Pumping that water up to her neck
Every week she sends me a monthly check
(She's a humdinger
Folk singer
Dead ringer
For a thing-a-muh jigger)
Late one day in the middle of the week
Eyes were closed I was half asleep
I chased me a woman up the hill
Right in the middle of an air-raid hill
It was Little Bo Peep!
(I jumped a fallout shelter
I jumped a bean stalk
I jumped the TV dinner
I jumped the shot gun).
Now, the man on the stand he wants my vote
He's a-runnin' for office on the ballot note
He's out there preachin' in front of the steeple
Tellin' me he loves all kinds-a people
(He's eatin' bagels
He's eatin' pizza
He's eatin' chitlins).

Oh, set me down on a television floor
I'll flip the channel to number four
Out of the shower comes a football man
With a bottle of oil in his hand
(Greasy kid stuff
What I want to know, Mr. Football Man, is
What do you do about Willy Mays
Martin Luther King
Olatunji).
Well, the funniest woman I ever seen
Was the great-granddaughter of Mr. Clean
She takes about fifteen baths a day
Wants me to grow a moustache on my face
(She's insane).
Well, ask me why I'm drunk alla time
It levels my head and eases my mind
I just walk along and stroll and sing
I see better days and I do better things
(I catch dinosaurs
I make love to Elizabeth Taylor ...
Catch hell from Richard Burton !).

Lyrics was added by iadaew

Lyrics was corrected by ivosicek

Video was added by kajamifkova