Bàas in the Underworld - lyrics

The hillock was covered with dead herbs, burnt by the frost
Beneath this desolate soil, Bàas lay on the altar
Priestess of Badararchand, condemned to sacrifice
Alabaster skin torn apart, gate to the underworld 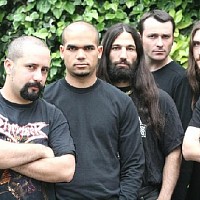 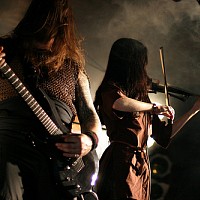 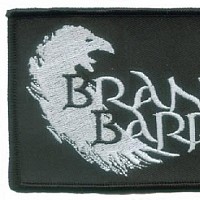 Narrator
Long time had passed and Bàas finally opened her eyes
With her blade engraved with oghams she went out of the hillock
Now the landscape was a sinister moor, beaten by the winds
Courageous Bàas advanced randomly in this dull desolation
Bard
Time seemed suspended but after a while Bàas heard a sound
The song of a merry bard
Narrator
Aggravated by this behavior Bàas mutilated the bard
And continued to wander in this glaucous landscape
She saw a decayed village where one sang and feasted in honor of Mar Macha
But their bowls were full of gravels and they drank earthy dirty water
Were they all insane to banquet in misery ? Ultimate offence to the mighty goddess
Bàas could no longer support this sacrilege, exterminated them without resistance
Roaming the timeless and sinister land she ended at the doors of an ebony castle
Bard
Exhausted, she entered the dungeon
There was standing a woman in a white shroud, so cold
An eerie light shined from this spectral being in the hall
That could not be Mar, so deprived of might
Bàas held up her weapon and bored the incarnation
Then Mar Macha appeared and fell in tears and sobbing
Once Kran’s spell broken, time has come to have the revenge

Lyrics was added by Rogles

Video was added by Rogles