Fuck up with all the culture lies that always buzzing on my head
I ran back to the past, where I've been so
Disgusted wet body by a licks from the present's heaven brokers
I uncover dream and lies of the past
Cut tongue and kill the truth's makers in verses of propaganda


They said God spoke to them
Robbed to abolish the law which haven't been written
A dream of race to build one world, rewrite the written law
Dictated mouth to mouth.
photo 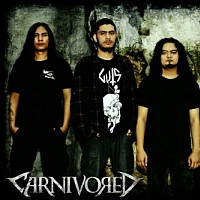 Worn Dream guarded, manifested on sword's tip
Time after time, formed a culture prison
Grasping independence, brother killing brother
Many version of truth that shouted
Thirst inside me has gathered
Burn this plagued cultures religions
Parasites of mind infiltrate from any source
Bring this world back to the primeval
Seeing the lies while being written
We never found, it's engineered
All nonsense you ate, Vomit up and buried
Burn all the politic propagate
In this day, There is no truth found! It's something made!
Even they holding the book, yelling like telling a myth
Make this culture religion accursed
Don't tell me you're a prophet, don't tell me you're a god
When I see this world's end? That you die with your sermon
Created historical, re-arranged and engineered to lucrative position
Published blindly over the centuries
Manipulated people's believe, you become the truth
The biggest lies ever
Don't tell me heaven is on your hand
Never ask me to believe in you
I'm Feeding the desire to destroy this culture that I hate
The lies that often broadcasted
Subtle coercion, slowly infiltrated, embedded in mind and become truth
Just like a shabby puppet that leading to the extermination place
I ran back to the past, where I've been so
Disgusted wet body by a licks from the pre sent's heaven brokers
I uncover dream and lies of the past
Cut tongue and kill the truth's makers in verses of propaganda
Lies become truth
There is no truth that found