Damn, am I attrocious, or aggressive
Feel like my approach is
We gonn ever split up, someone call moses
This is ridiculous, I say fuck you
She approach with the fist up
Me in rush hour, eyes black like chris tuck
Only way I fix this here, get my dick sucked
Or you on my sick buck, sick, sick a probation
Officers holding piss cause
Picture me in pittsburg, with your own venice getting lettuce
Whiel I sip syrup
And I got a fetish for alexis in a thin skirt
See I’m a dog, but a pimp first
Pinnacle of dollar bill insert
Significant work, I’m a jerk though
Treat her like she only want a dollar bill from me
And a fur coat,
When she want love, I’m desert cold
See her every 9 to 5 but we don’t work 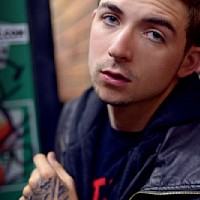 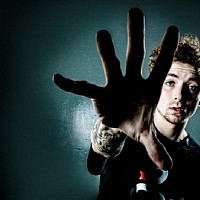 We exchance perceptions, she don’t say nothing positive
Said I don’t know women and they prerogative
Say that technically we are opposite
She a nice girl, I’m a wolf inside a metropolis
Obvious, I got my insecurities, and impurities
And addiction for currency, but currently
She was working on herself
Said she had her bags packed
We moved out by the 12th
But fuck it, you kicked your heart off bout that shelf
I slayed mine
They say that love is a casualty
Know it’s paying crime, and they ain’t got no justices
They just got great vibes
And the rumors that travel far
You gonna hate mine
I tell em you fucked every motherfucking my whole click
And my old bitch, and the man that you met at fubar
And the 2 con in 06
Like o shit, you say I’m a piece of shit
Well it’s probably true bitch,
I’m just making piece with it
She say I’m a pos, pos, pos
that’s right, pos, pos, pos
bitch fuck you
Pos, pos, pos, fuck you, fuck you
She tell me that I’m the bad guy
Yeah hoe with low blows
She said appointments, I give her no shows
She is together, but I’m solo in red cups
And she fed up seeing these fuck hoes
The bimbos that’s online
Fuck’s your problem
Kicked me out of that room
Late night when she found the condoms in my pocket
Try to say they weren’t mine, my damn lie
And I’m sucking her dry
Who is the vampire,
At first she biting on me,
Then it’s love push, she enticing on me
Told me that I ain’t shit,
Started throwing vices on me
And that’s when I get name calling
And bring the fights with the father
And the temperature inside the room just get higher
And I ain’t taking shit from a stupid bitch
Yo and that’s a promise
As you tell me be honest
Like did you love me
And I say hell nah bitch
It was a fuck thing
And that’s why I’m a pos, pos, pos
This the shit that I get down to when I lie
I don’t got the patience
To deal with this shit
And this is who you are dealing with bitch
A stone cold individual
I’ve been called heartless, asshole
But they say that I’m a pos.

Video was added by karkola