At Least For Now 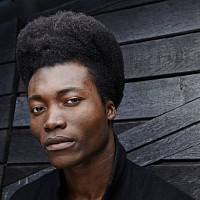 "Where is your family?
Where are your loved ones?" Someone uttered
Whilst he went on crossing the channel
"Well, they say no man can be a prophet
In his own country, so I left, here I am
Come on embrace me, hold me!
I am your brother!"
Now whilst he kept on talking
In his left pocket layed the prose of the magnificent Orwell
His right hand embraced a battered
Guitar borrowed
"Borrowed from me!"
Come to think about it, I think a few years ago
I heard him talk about how God blessed an eagle with 54 stars
And maybe he's gone he's gone wondering
Looking for his kind of star
But even stars
If we think about it, even beautiful stars
They tend to shoot through the night
And you never find them again!
Never and never and never again!
And so don't you judge Winston Boy
Don't you ever judge Winston boy
One day this boy might be the man
Though clearly nobody knows when or how
One day this boy will stand in front of a pulpit
As the world gives him but a minute
And there he will tell the world
Where he's been and how
Underground to upper ground in the depths of
I will surely survive
He shares his story with a cup of tea streaming from his eyes
One day this boy will be fine
One day this boy will be fine
Better watch out now, that day might be today!

Lyrics was added by kateingetia

Video was added by kateingetia

At Least For Now