Even the Gods May Be Overthrown - lyrics

Share
I will lead this army forward despite my growing womb
We will see this to the end, Laius will bleed for all his sins
I'll rip out his heart of stone and drink from veins alive
The suffering he's caused will return to him tenfold.


Heavy are the loses we have faced
And yet the army keep apace
Broken by the rebel forces
The injured left to die.
Arms of the ready cuts through them one by one
No follower of Laius will see tomorrow's dawn
His legacy forgotten - a new age can begin
Rebels raise your heads up high we fight for our freedom.
photo 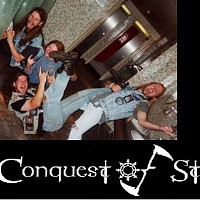 Walking wounded struggle on and on
And knowing that rest is certain death
The weather worse now day by day
The land has turned against us.
In honour, we serve the saviuor of our land
Our forces will fight util the final man.