Sold as a Crow - lyrics 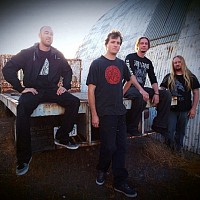 A three-martini lunch unfolds in Ft. Detrick
Story of the day on no one's breath
Diethylamide in the blood
Visages of hell on earth undone
Mass hysteria consumes the village
People leap from rooftops trying to fly
Scratching to the bone, insects imagined
Drowning in the sea to end the pain
The straightjackets fastened tight as they loaded the asylum
Thrashing wildly in their beds, bodies melt like molten lead
Stomachs full of coiled snakes drove them to madness
but delirium passed in time, with no admission of a crime
Black swan song
Seven gone
Test gone wrong
No stopping
A "Stormy Epidemic"
Cooked up by Sandoz suits
To control a revolution
Black swan sold as a crow