A Painting In Dark - lyrics

He weeps, but no one hear
Is this the final point of his life?

The direction of his soul
A painting in dark
Where is he to go
In this maze of confusion
Will someone give him the strength
To chance and forsake this path
Is there somewhere a heart
Full of freedom who can call his name?

He strives towards
Meaningless, endless horizons
Traveling and searching
For true life-giving peace
He wipes his tears with golden cloth
Lost in the lie: "This is all you need"
He asks: Is there any true peace at all?
photo 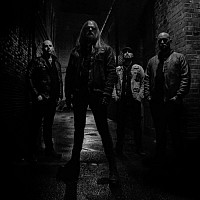 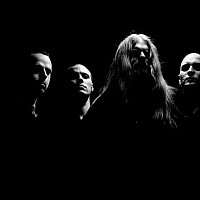 These cries for help echoes louder
Through the dark night of his soul
But while praying in despair
He discerns the shape of Love incarnated
There he is, the One
Wearing the bloodied crown of thorns
His heart is beating with mercy
And his peace caused the escape of fear
But a silent mist arise
Covering the vision of loving truth
With a scornful smile
The evil one pull down the veil
Over the human face
While telling the constant lie
This mercy is not for you
Twisting God's true words
In the presence of honest seeking of truth
That lies is spoken by the lips
Painted with immutable cruelty
The own flesh is to weak to resist it
But God has seen the will of his heart
And listen: the scarlet story is told.
He can hear the sound of dripping blood
Deliverance is made
The punishment for his transgressions
Are obliterated at the cross
The final cry from God's
Faultless wounded Son brought freedom
The sins are crucified, restoration is given
And the veil is lifted off
He turn his eyes to the hill
Beholding the destiny of his mistakes
There hangs the one who paid his price
The one who conquered death itself
He looks towards the new horizons
Where the sun never sets
And starts to walk in its direction
On the path of the eternal life