The Fall of Gondolin - lyrics

The most beautiful city built on the middle-Earth,
It's splendour was highly acclaimed,
The Noldor Elf grew mighty and strong,
In the land were Turgon Reigned,
Then Tuor was sent by Ulmo-
The lord of the ocean and sea,
To tell the people of Gondolin,
Prepare to fight or flee.


But Turgon he was stubborn,
"That will I not do!".
He had grown to love his city,
And the terror of Morgoth he knew.
The city was discovered,
And Morgoth sent his legions,
Orc warriors with the fire-drakes,
Led by the Balrog demons.
photo 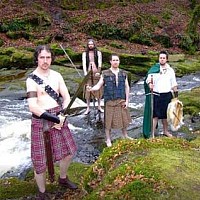 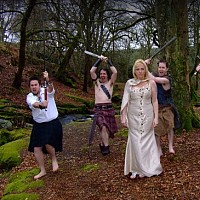 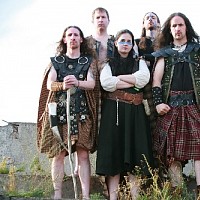 They appeared before the gates and quickly the Gates fell,
The way was now clear, Through the Elven halls,
The orcs of such hatred poured into the breach,
With scimitars they stabbed both man and beast.
The Noldor Elf advanced with hammer of wrath,
And the kindred of the tree-bravely they fought,
The blows from their hammers, The dint of their clubs,
The orcs fell like leaves but this was not enough.
The lord of the Balrogs gathered his demons,
and made for the folk of the hammer.
They fled in terror rather than of craft,
Down in the plain they all gathered.
But a fire-drake was loosed upon them-
In the house of the hammer they died.
Still it is sung that each Elf of the hammer,
Took the lives of seven orcs to pay for their own.
Gothmog drove the dragons into the cities heart,
Orcs and Noldor fell under the confusion.
The cold-drakes began to tear the streets apart.
The Noldor began to realise the battle they'd lose.
The most beautiful city built on middle-Earth,
It's splendour was highly acclaimed'
The Noldor Elf grew mighty and strong.
In the land were Turgon reigned,
But now it lay akin to ruins,
As the fire devoured its insides,
The last hope for the Elves who lived-
Was to run and flee and hide.
But Turgon was a noble king-
"That will I not do!",
He stayed to die with the city,
The only one he knew.

Lyrics was added by Andrew_Deer

Video was added by Andrew_Deer