[1] - Shit can happen [8X]
[Kon Artis]
Yo, yo, huh, yo, yo, yo
That's right motherfuckers we back
Same slanging, orangatangin, wilding out on hoodrats
They say I act like I'm too famous to say hi
And tell 'em what my name is but really I'm still nameless...
You niggas don't get it yet do you
Dealing out platinum or flop I still put it through you
Wit a luger that'll spit fire
And hit higher than a pitch by a bitch like Mariah
You think for one second since we got a deal
That we won't deal wit you in front of St Andrew's still?
You gay rappers better learn that
I won't stop until I see 'em turn back
If you don't slow that roll you got
You gonna see these Runyan Ave. niggas that really need some Prozac
For' sure' that, ask the others
But gator lay you down next to your mother's mother's grandmother 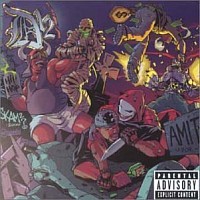 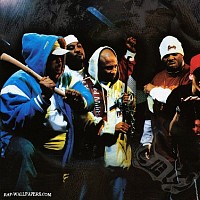 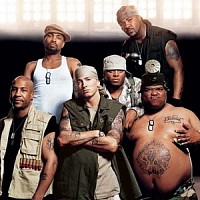 [Kuniva]
You know I'm feeling real rowdy tonight
Ready to fight and half the niggas I give dap to I don't even like
The same cat who never gave a damn about your name
I gives a fuck about it like the next selling Clippers' game
I kill you in ways you couldn't even fathom
You and your madame, it's really unexplainable how I have 'em
Who call theyself screaming about a challenge
Nigga we got a gift while you barely making it off mere talent
My skills are deeply embedded even your hoe said it
She was knock kneed I fucked her now she's bow legged
In the middle of rappin I drop the mic
And have a stare down and jump in the crowd and start scrappin
Kuniva and Kon Artis my nigga we get it cracking
While the paramedics pick you up we on the side laughing
[HOOK: 1- in background]
[Kon Artis]
Now this aint funny so don't you dare laugh
Shit can happen in him and yo' ass
You can be touched don't think you can't
Cause niggas aint fucking around no more man [repeat]
[Swifty McVay]
The feds can't hold me, I hold feds
I was born wit a dark ass cloud over my head
Raining acid, you can't refrain from gettin yo' ass kicked
Cause you talk too much you ask for it
I'm on some massive shit, everybody ignore me
They wouldn't fuck with me if I was performin at an orgy
These niggas get confronted, then they change stories
I touch you then they thinkin everything is hunky dory
I even have you pour me the gasoline for me
Pulling up slowly, cocktailin' your homie [CRASH]
You met a lot niggas which you wouldn't wanna know me
Yo' ass might not even make it home wit your rollie
Don't even try, in your system like e coli
Trying to beef with me, nigga please yo' people die
I'm so wicked that my mama gave birth illegally
I survived the abortion immediately, SURPRISE! AH!
[Eminem]
Picture me sittin in a jail cell rottin
Or barricaded in a motel wit twelve shotguns
So when the cops come knocking each hand's got one
Cocked, ready to dump slugs heavy as shotputs
One man army, guns can't harm me
Young and army, worse than my Uncle Ronnie
Ever since I got my first gun pulled on me
I can't stop airing out my dirty laundry
Middle fingers flipped and censorship
Your friends just flipped over the swift penmanship
Ever since I spit some shit on Infinite
I been giving it a hundred and ten percent
Cause when I'm bent most of my energy's spent on enemies
Eighty percent of what I invent is Hennessey
Twenty percent is from being hungry as sin
Ten's because I love being under your skin
Yeah shit can happen, so stick to rappin
Quit the yappin or I'ma lift the mack and
That can lead to another mishap happening
Skip the crap get the can of whoopass cracking
[HOOK]
[1- continues in background]
[Eminem]
It can and it will (nigga)
Fuck around with Amityville and you DIE
Insanity spills from the mentality of twelve motherfuckers in six different bodies
With their personalities split
Fucking you up wit hit after hit
Sticking you up with clip after clip
Making you suck dick after dick
Dirty motherfucking dozen
The Kon Artis, motherfucking Peter S. Bizarre, Swifty McVay, the Kuniva
Dirty father fucking Harry
Puttin you down in a cemetery, you get buried
All you of you motherfuckers suck our motherfucking cocks
We are not playing, we are not playing
We are not bullshittin, this is not a motherfucking joke...

Lyrics was added by romana1997