At the Gates of Hell - lyrics 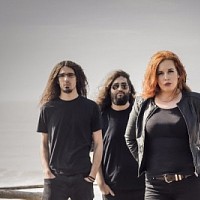 "Spirits of dead warriors flying around me
their damned souls condemned to (eternal) pain
they'll burn forever in this sea of fire
as I welcome them to these gates of mine
The smell of sulphur poisons the air
as the flames reach the top of the surface
I laugh at this burning times of war
as gods and men are drowned by the spell of death"
She's Hel, the cruel woman
half beauty and half beast
She's fire, blood and poison
not good or bad, just fair

Lyrics was added by mara5a

Video was added by mara5a