Just out of reach, always too far.
Never to know the lives I have claimed,
nor care who they are.
These possessions, mere possessions,
who are mine to enjoy.
There's no feeling when I'm stealing,
the blood of the lives I destroy.


Just out of reach, always too late.
Life's treasured gift eludes be again, and won't hesitate
for a moment, for an instant,
when a heart beats its last fleeting by me,
to deny me the life I once knew in the past.
What a glorious life in a time dead and gone,
when the name of Dracul was respected and feared,
but the world has moved on.
And the prince who commanded with guile
became the leach these mortals revile.
Existing by night, denied to the light.
Never to die.
photo 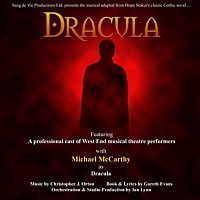 A suffering soul denied its ascension,
condemned to exist for all time.
An infernal creation that has no salvation,
eternally damned for its crime.
I'm a parasite cursed forever by a god I choose to defy.
Existing by night, denied to the light.
Never to die.
She is the prize, a trophy to win.
This is the hour when she becomes mine
and her heart lets me in.
When I found her, when she found me,
then my world came alive.
In that moment, in that instant,
I felt a new purpose arrive.
For the blood is the life and her life will be cursed.
She will yearn to escape her damnation in death
that cannot be reversed.
But this beautiful prize will be mine
by a trap of my vengeful design.
Together at last, my loneliness passed, she will be mine.
Existing by night, denied to the light.
Never to die.

Lyrics was added by shadowsteed

Video was added by shadowsteed