Forged by Fire and Stone - lyrics

Fathers of seven forged by fire and stone
Born to the iron mountains they now claim as home
Bound to the will of hate, by an ancient smith of yore
Forgotten they lie, beneath their shameful lore


Awaiting their song from the timeless hall
Maker of moon and stars, stands fierce and tall
Driven by a ruthless rage, his molten hammer flies
Weeping with great remorse, his iron hammer dives
Through the misty clouds, crashing with thunderous power
Pleading with mercy, the seven tear and cower
photo 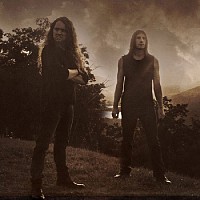 Unbarring sorrow loosens their merciful hold
Horns sound in the distant halls, a new journey untold
Seven axes granted to seven fathers, wise and bold
Unyielding to the dark and corrupt, warriors of gold
Crafted by the storms of strife and stone
Baring snow and ice, their resilient blood is sewn
Driven by a ruthless rage, his molten hammer flies
Weeping with great remorse, his iron hammer dives
Towards the rolling hills, bellowed with mighty courage
Under the mountains, in the darkness lying among the stone