[Dre]
Yo man I don't think they heard you
why don't you tell 'em what ya name is.

[Eazy-E]
My name is Eazy yeah this is true
keepin' your attention is what I'm gonna do
hardcore yo I could never be soft
askin' me my defin' they say the boy goes off
fillin' up my memo with the touch of my rhyme
suckaz stayin' with me cause they know the time
quiet on the set because I'm about to begin
and if you didnt hear me boy I'll tell you again
my name is Eazy or just call me E
but It doesn't really matter to me
cause I'm the same person
whether serious or rehearsin'
I just gotta keep cursin'
this is for the radio so I better chill
they won't play it if I co get ill
but I'm like that and thats an actually fact
because the street is where my heart is at
yo I don't do dope but I'm dope not a dope
but I'm doper than anybody who trys to cope
if the rhyme I'm dispayin'
and the beat thats playin'
yo you could try all day
and you still won't match up with the Ruthless P.O.W.
cause Eazy's doin it Compton style
thats the city and you say you could get some
yo it's Eazy-er Said Than Dunn. 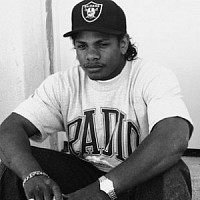 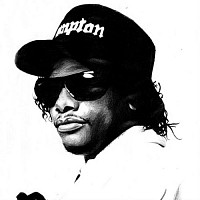 [Eazy-E]
Now it's easy for me to get my point across
so listen up close if ya don't ya might get lost
I'm not a role model or a Dr. Seuss yo I'm a gangsta
and I'm about to get stupid
I guess its time for the trama
with the E-A-Z-Y-E comma now thats drama
so pay attention by the way I must mention
I'm comin' off hard in the third demention
with the glare
but you don't need no glasses to stare
it'll probably take you in and it's just like your there
with the E on the gangsta tip
so if you think I'm a flip or slip don't even trip
cause I'm a destroyer
my homie Dre is a doctor not a lawyer
dope mc employer on Ruthless and thats my label
to get the money, the women, and co bust the fat cable's
boy, master rhymers of toys
I mean str8 while ya suckin' with the girls enjoy
you must be sick or ya lonely
how ya gonna diss me if ya don't even know me
([Eazy - E:] Yo Ren)
([M.C. Ren:] What sup)
get the gat show 'em where it's at
and that's just the sound
and next time I'm peelin ya cap
to let ya know where I'm comin' from
Eazy said it and it shall Be Dunn.
[Chorus]
Wooooooo!
Wooooooo!
[Eazy-E]
Radio jams are the part of the cycle
eazy-er said than dunn yeah thats the title
rubbin' the lady's only the fly ones ya know
([M.C. Ren:] but would if she's lucky)
Eazy come Eazy go
don't ask to battle me home boy what's that
you wanna battle me boy ya better be strapped
cause where I'm from it ain't all about that playin'
[gun shots]
now that's what I'm sayin'
Sevy thought that I was born in '73
now everybody want's to know the A-G-E
girls on the tip fellaz too it seemed
had everybody thinkin' I was only 15
the fellaz would annoy me
the ladyz would adore me
and what was I to do
I wishin' nothin' lady's do
cause the ladyz I luv 'em
nice and then soft
I hate male groupies so just step the hell off
I'm the real Eazy cause others be fakin'
tryin' to game fame off the name I'm makin'
sayin' on your records you could get some
yo home boy its Eazy-er Said Than Dunn.
[Chorus]
Wooooooo!
Wooooooo!

Lyrics was added by Diceman-Cube

Video was added by Diceman-Cube