Chained to the Horizon - lyrics

Hard days were passing by on Erilan Island... by then the shiny past was just a memory. Sirhanon had become a shadow of himself, and his sickness had brought misery and frustration. On all fronts defeated by Urione, king of Egylon, he had no other chance but surrender and become a poor king of a glorious past. By now his daughter Vesna, princess of a past reign, was his only hope for a future for the kingdom. She needed to marry Urione's son, prince Falerim, who was in love with her, so the reign would be saved.

For the freedom of your soul you will fight against the only constraint of earthly life... a war against an invincible enemy, one single hope hidden in the world you thought was your friend.

Her black eyes see in the sky that boundless horizon, white skin and sadness on your cold face. "I want to live in the sea, essence of my soul" she's on her rock while breeze touches her cheeks pale.
Princess of a glorious past but daughter of a poor king, ready too, all to conquer again the power. 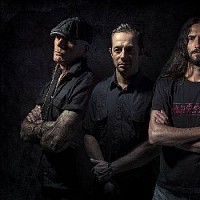 I want to live forever in the sky
Because I won't hear the sound of a cry
The sea and the sky are my only friends
They give me strength to live in this land.
If I could now, I'd go away from here.
I don't know, if I'm free.

Desolation lands, without control.
Demon's scream, demon's eye, fear to die.
Evil singing closes the way toward sun
he feels to lose the might, a darkness in the light.
An only chance to save, everybody knows
a sad life of lies, a lover without a face.