He had his guns around the hips
Weapons of faith, his curse divine
They didn't make any move or a sound

They shed blood, on this godforsaken ground
And that was all he found
photo 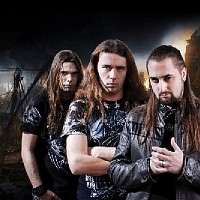 The world gone further, he was standing still
All memories were blurred in time
Childhood fades away, forgot his father's face
He was on he's way to the (Dark) Tower
He's the last of he's kind
He's the lonely, he's the wild
Hunter in this world of good and evil
On the way he found a man
Spoke with raven, betrayed child
World gone changing on the path
Silent screams torn up by the wrath
Still hunt him in the night
The world gone further, but now he's moving on
All memories were left behind
The scars are growing deep, a promise left to keep
The tower's calling, the tower's calling... him