Jail bait looking for a date
With pants so tight you can tell what she ate for breakfast
Old Doc Jones he out on parole
He drinking well whiskey waters like their scorpion bowls
Cock cocky Spence got cocaine confidence
Drinking twelve dollar martinies tip the bartender twenty-five cents
Then there’s Jeremiah well Jeremiah he’s alright
Bar Flies, dead dreams and rivers of whiskey lies
All wondering where the rent money went
All wondering where the rent money went
photos 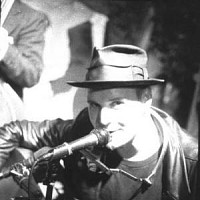 Dickle Dick drinking Bourbon ‘till he’s sick
He’s 25 but he looks like he’s 46
And Margo was a beauty queen, she hangs around with Norma Jean
They’re both playing for the same team- if you know what I mean
There’s Bartholomew poet, pianist, actor
You know he only time I seen him act he’s acting like an asshole
There’s fighting down his ally between Harry and Sally
They got married in the valley, they’ve been fighting ever since
Lovely Louis Keeper of the last kept bush in town
Oh no I think I smell a brush fire
Then there is Jerimiah, Jerimiah- he's allright.
Poor Smack Jack can’t seem to get his old life back
Lost his license to hack while driving on crack
Barmaid Tish, she’s quite a dish, she keeps her brains in her tits
She make very nice tips
Uncle Ray smokes 6 packs a day, he won a grand yesterday
But he lost 2 today
And there’s angry Henrietta, thinks all men are out to get her
She looks nice in a sweater but don’t let her know you think so
A the owner, man with the eternal boner. He’s had a hard, hard life
Going on his 11th wife

Lyrics was added by tomka1