Death of a Warrior - lyrics

A Step in the Dark

The night is cold in the warrior's soul
Thoughts of death are storming his rest
In the vigil, a vision of a last setting sun
And before the dawn he awakes
Beholding his sleeping wife
With tears in his eyes, he kisses her away


The dawn is sad and grey
There will be no glorious day
But he's not alone, for his brothers are awaiting him
While marching one last thought
To his home, to the one beloved
Now the sun is high and gleaming swords rise
photo 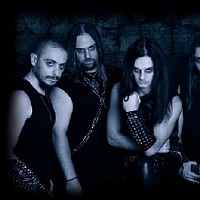 Attack!
The war is sad and cruel
There will be no returning home
And he feels alone, empty to the core
While fighting one last thought
While dying, to the one beloved
Now that life is gone, he'll follow his road
Death!
He takes a look at the red setting sun
He's kneeling down, waiting to die
He's closing his eyes, he's leaving this land
His soul will fly to places of light
He'll enter the gates, his heart filled with pride
The ancestors await to welcome his soul
And he'll wait for his wife to die
To lead her back to the light

A Step in the Dark