The King Is Dead - lyrics

Assassin, Assassin
They've come to take his life
They wave the flag of Anarchy
And chant "The King Must Die"
The overthrow of authority, must start with his demise
And so the witches all agree that we must close his eyes


The King Is Dead, The King Is Dead
Royal blood will flow like wine
When the hands of death break free
To grip at last the majestic soul of this our dying king
We'll pay no homage to this man, his death means
but one thing
The prophecy has been fulfilled to let you people sing
photos 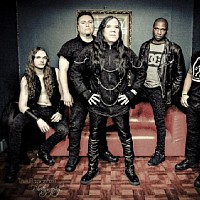 The King Is Dead, The King Is Dead
We'll throw his head to the ground
To show he wears no crown
We'll stone them till they bleed
To the wolves, them will feed
All we need is a lock from his hair
And then we'll soon be there
The spell will then begin
His life will surely end
He'll not see you coming, all he'll see is the flash
of the shimmering steel
Rush of the pain, from the venomous sting
Will surely force him to kneel
The kiss of death upon his lips
The cold embrace of doom
The sudden attack of anxiety
Will begin to end very soon