I be too ill nigga
In the field give a fuck how you feel nigga
Young honey that's a real spitter
Bitch run know she done when the wheels get her, uh
Steel triggers, my bill's bigger
If you see me with a bitch then I kill with her
And I cut off all them fake hoes they still bitter
So I'm takin' all their money ?I'm a bill quitter?
Hell, speed up
Nigga re-up then we reload
You wouldn't understand cause you ain't grow up on the east coast
Can't shake no hand I'm tryna keep close, I keep close
You with the little banked broke hoes on sleep mode
I ain't waitin' on the sun to get up
I ain't watin' like a fool for the sun to get up
With some bitches who won't hesitate to gun up the truck
And get to bangin' on the necks then put one in the gut
Now throw it up

I drank all night and I'm still buzzin'
Now my ex tryna call me like we still fuckin'
People tellin' me my old shit's still bumpin'
So at a show what he done and he still jumpin'
Illy, I'm really ill
If I say a bitch realy, I really will
I ain't never murdered no one but I really kill
Test me and Imma show I'm made of really steel
Don't get too smart
Rich bitch I was raised with a true heart
Bitches talkin' but the story always two parts
They can't tell whats on my mind cause it's too dark
You ain't even got time my shooters too sharp
You ain't ballin' you a club in the cubicle
I'm 'bout money I ain't tryna be beautiful
I fuckin' smell like money on my cuticles
I told my bitches play this shit at my funeral, ho
photo 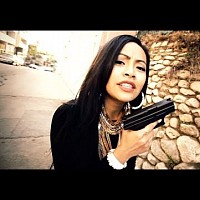 Lyrics was added by sichve

Video was added by sichve