Led by the king of the northern mountains
A few men await to show them no fear
Willing for fighting with fire and weapons
Ready to face the enemy steel
So, let´s ride searching death or glory
Face the inner fear and ride to war
Charge against the troops of the invaders
A new morning of victory will come!!
photos 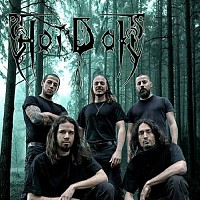 Last man standing!!
The hills will cry the loss of its sons
Last man standing!!
The fields are covered with blood
Forced and pushed to fight many lives are lost
But in the rapture of the fields of corpses I sing you my land
I am the rays of the sun of the winter´s twilight
The rivers, the mountains and the drops of rain
A son of the northern tribes of Iberia
I am the one who will fight and will grant you his life
The wind encouraging the warrior´s pride
A wolf, the life that never fades away…in the nightsky
In the name of freedom the history is always written
With the blood of the forgotten sons of the land
For a new sun to rise
From the northern hills to the southern depths
We march to battle and sacrifice our flesh
Without fear in our hearts for die we must
HAIL VICTORY
GLORY TO THE FALLEN ONES