Stretch your boundaries to someone’s nether shore
Playing with the fire that you call the game of war
Lost in battle fury then, when the killing’s done
There’s another fucking cause with some other mother’s son

Death comes swift on leathern wings. You know that’s all the future brings
Just a pawn in the game of politics: No cause, no name
photo 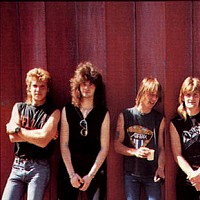 Left with nothing but your war-torn memories
Fighting not with men but some pseudonym, disease
Yours is not to question, just to do or die
Eking out existence, a shadow of a life