Drugs in my veins taking passage,
Laid out trippin flipping addict with the habits,
Paid a couple thousand for the casket,
Niggas wanna sleep well after living savage,
Vertical face split, skip the fuckin case shit,
Bags in my eyes and my dreams in the hell pits,
Burnin all my pictures from the scenes in the mansion,
Using dirty dishes mentally I'm Charles Manson,

Smooth nigga, false step you rise,
Don't Move nigga, crosshairs in sight,
The Zoo nigga, concrete both sides,
Who you nigga, one step you die,
Tekashi69 from that scum fuckin squad no doors break the walls scum gang till I fall,
Zilla resurrect outta the crypts,
The lochness off rip green yellow the piss,
The Palm grip four fifth runnin round in the trench,
Want shit talk shit might rip off ya lips,
If you god I'm Kratos, the blackest of rose,
The flower that bloomed at Selena it's thrown,
The Yokai killer creepin in the grove,
Y'all niggas pose I'm gone bake in the stove,
photo 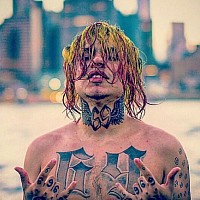 Came to the god and ya jaw got bent,
Big shit loud like the block got hit,
Came outta jail still hitting them licks,
Off on bail still flicking that wrist,
Want Collabs ain't doin it for nuthin,
Wanna meet up scum gang ain't trustin,
Gettin beat up nah slick we bustin,
Switchblade hip square up I'm cuttin,
Acting like you scum but it ain't in ya veins,
Acting like you scum but it ain't in ya brain,
Lord of gauze and the God of the pain,
Man I draw with force of the four horseman,
Hundred to a thousand to the gold fuckin brick,
You Fuckin with the rawest of the raw with the grip,
With ya white tee cotton and the shit say rip,
Ten toes never ever trip bitch,

Lyrics was added by Kerhy

Lyrics was corrected by Kerhy

Video was added by Kerhy