Often my Delerium is so strong that I can't dance to the music,
Or walk the line between my drums and everyone else’s'.
Attempting to shoot down the sun with a slingshot and bad aim
Got me missing the point and, losing my religion hand to hand, shit...


So I rock the cradle with menstrual speak,
Buck my eyes and show my teeth when the lights come on.
Cause no matter what the deal, I want my money up front, preferably in small bills, cause
Fat knots draw honeys like horseflies to the dung-pile by the fence.
At first it was a game, smoking weed and drinking to see who dropped first,
But as the world knows, crazy crew usually ends up making play-time serious.
Now-a day, skills don't pay big bills,
Better to go get a gimmick, and cook a top dollar video over the fire, yea...
Sample the left vaudeville, y'all...
photos 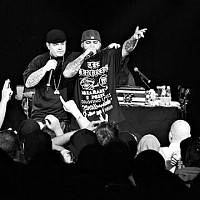 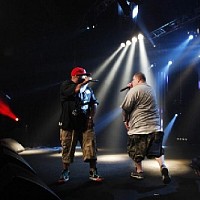 Sucka-time succotash for the consumer,
AKA niggers with no leaders to listen to,
Lovers with no one to make love to,
Dreamers with no place to sleep,
Countries that got no choice but to rely on young Miss United States and her fast ass,
Police woman of the first, second and third worlds.
See, we simply request OUR oil, ahead of schedule.
And we just might drop some scuds on your ass too,
We don't give a fuck,
'Long as we got the biggest gats on the planet.
Take a so-called civilized photocopy and scan it,
Cause we've been...
Blowing up other people's shit up since before it was a trend.
And now there ain't no such thing as nationalism,
Now niggers can ride on TOP of the bus if they damn well please.
And brothers instead get Greek and snatch women’s' clothes off,
Like frisky drunk-ass DT's under summer sun.
Belly flopping in the waters are more primitive ways. Cause,
Dirty sex on video pays these days. And,
Niggas got a way of making slow money fast,
Writing checks they ass can't cash. Like
Mystical probe-like rhetoric, not payin' the rent. And,
You know come 2000 internet hell gonna catch the chills and repent. So
Save as much as you can on driving hard,
Cause you're gonna need this information down the road, bro.
Standing freshly dipped and educatly spoken, he approached,
Perched like a monster.
And the world cried.