Church hymn for the condemned - lyrics

Love songs for the apocalypse

Life's like the feeling when you had a point, but forgot it
Had a ticket for my train of thought, but I lost it
And God gave me instructions for how to live my life
But I couldn't read his handwriting
So I burnt them last night


But I'd take the beauty of chaos over ugly perfection
I've woken up on the wrong side of the bed every day since 1987
I can feel myself slipping away from any chance of redemption
But that's OK cause if that's where Falwell goes
Then I don't even want any part of heaven
A guy on TV offered to save my soul toll-free
But that would've required getting up off of the couch so I was too lazy
Instead I wait in the bushes outside of a cop's house, holding a twelve gauge
God isn't dead, but I'll get that bastard some day!
photo 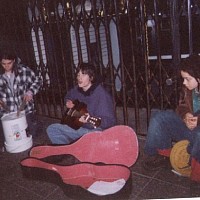 And I'd take the beauty of my chaos over anyone else's perfection
I've still woken up on the wrong side of the bed every day since 1987
Nothing scares me as much as the fact that I don't give a shit for redemption
But that's OK, because if that's where Limbaugh goes, I don't even want any part of heaven

Lyrics was added by Filduson

Video was added by Filduson

Love songs for the apocalypse