Carcasonne has fallen
To whom do we turn in these times forlorn?
High in the mountains we will find
Refuge from the coming storm
Shining swords and burning crosses
Rising up into the skies
Blinding rage and hate prevailing
Growing, spewing from their eyes.
photo 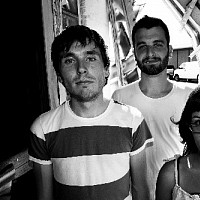 You can run but you can't hide
My power is too great
I know that God is on my side
Your penance is too late
I shall weed out there heretics one by one
They'll be purged in fire in front of everyone
I shall make examples out of these hypocrites
I'll send them down to hell's fiery pits
We must flee to our stronghold high and dry
We'll be safe in Montségur and Cabaret
There's no shame in running
For he who fights and runs lives to fight another day
"And so it came to pass, The remaining heretics sought shelter in the high Black Mountains, far from Simon de Montfort's merciless persecution. Those who were captured were tortured, burned at the stake or buried alive, all in the name of God. And even there they weren't safe, for after seven weeks of siege, settlements such as Minerve and Lavaur were overrun by the holy army... and razed to the ground"
Weeks and weeks of combat and assault
Minerve stood high and dry
But in the end thirst and famine brought them to their knees
They would stand with their attackers eye to eye
They were given a choice: to renounce their faith
Or to perish in inferno at the stake
With heads held high, they would rather die
Their beliefs they would never forsake
On the day of Mary Magdalene
One hundred and forty were lead below
At the bottom of the gorge waited a forge
Where death was ready to sow
The parfaits were piled one by one
Onto a seething tower of flame
Embers flew high into the sky
And the crusaders, they felt no shame
"Neither death nor life can tear us from the faith to which we are joined"
A plague spread through the land
Fueled by the brotherhood in white
He ruled with iron fisted hand
Wielding his god-gifted might
Shining swords and burning crosses
Rising up into the skies
Blinding rage and hate prevailing
Growing, spewing from their eyes.
"For nine whole years Simon de Montfort tortured, mutilated, murdered and burned his way across the Languedoc. But the parfaits stayed true to their beliefs."
Shining swords and burning crosses
Rising up into the skies
Blinding rage and hate prevailing
Growing, spewing from their eyes.
Spewing from their eyes!

Lyrics was added by hahaCH