[Lucidious:]
It's been a long year
I wish I could explain everything I am in one song
And what I believe in
But I question what I'm believing
I've even questioned my music (my music...)
But that ends here
I've found how to make it out alive (alive...)


Yeah
Pressure I'm feeling is building it's cold
I wanted this back at seven years old
Try to live present but can't let it go
Spend my time writing in rooms all alone
If you think this is dark then you don't even know
What goes on deep inside of my soul
I'm a role model to many people that don't
Be who they wanna be won't let it show
Chest is tight find it hard to breathe
Many regrets I find it hard to sleep
What if I made it yeah what would that mean
To go touring through cities just me and my team
I never thought that could happen to me
Suddenly people reaching out want meet and greets
Autographs pictures begging me please
Lucid can you show me how to break free?
You might have forgot I'm a human too
Putting' together tunes steady sparking fumes
Finally they got to listen now they all consumed
Acting like dogs in a darkened room
Would you really fucking like it if I barked at you?
Put you up on a wall and threw a dart at you?
Fuck everybody you ain't really thought this through
I ain't settling for shit that was taught to you
[Merissa Shaban:]
Do you want to, find a way out?
A way out of here
Can you feel it? So conditioned
To the things we're taught to fear
And we're trying, still were climbing
Can we make it out alive?
Souls are tied in, no longer silent
Break the chains in the rules of life
photo 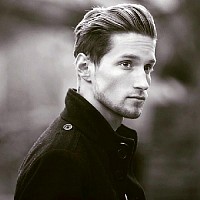 [Lucidious:]
Leaving the people you love can be difficult
Love em' today then flip like a reciprocal
They're gonna hate you they won't understand
Blame you for changing becoming a man
Question your visions and question your plans
Gotta say fuck it you can't give a damn
Or I promise that you're gonna end up like them
Don't be the guy that says remember when
Do everything that you gotta do to get outta bed
You gonna fail a fucking lot and make a thousand attempts
Gonna be days you thought you were better dead
You have deal with the shit that they said
If you ain't losing people you ain't taking the steps
Doing what you gotta do to make it up to success
Too afraid to move, but you wonder what's next
Paralyzed in the moment looking back in regret
And you ain't got a clue what I did to get this
I don't gotta party every night to feel I exist
I put every fucking penny into making this shit
So I plan on taking every benefit that I get
Dedicated everything to perfecting my craft
Think you got a clue but you don't know the half
Nobody gave it to me your fucking perception is whack
I lived in depression and I ain't going back
[Merissa Shaban:]
Do you want to, find a way out?
A way out of here
Can you feel it? So conditioned
To the things we're taught to fear
And we're trying, still were climbing
Can we make it out alive?
Souls are tied in, no longer silent
Break the chains in the rules of life
[Lucidious:]
People asked me why I started to rap
They wanna know what is sparking these tracks
It's pretty I simple I picked up a pen
I got pissed off and I started to vent
I connect with my music more than I do them
Older I get I been losing some friends
Bigger I grow the more I must confess
There's part of me hoping that all of it ends
Try and take a second out to walk in my shoes
I never sleep always writing from a quarter to two
Suicidal at a point in time but nobody knew
Everybody wanna tell me their opinion or view
Yeah people love it and some hate what I do
Look at my phone and see people abuse
Technology kids getting bullied in school
Overdose thinking that gossip is true
It's pretty sickening just how vindictive
A bully can be to a kid in the kitchen
That's going through hell while his parents are bitching
About making money and facing eviction
All while taking prescriptions
Fix ADD ones that causes addiction
Nobody listens (nobody listens)
Fuck it I guess that we all are conditioned