I woke up, hangover gone, and I was feeling alright
'cause I had slept until the sun went down that Saturday night
Got out of bed and thought to myself, "Now what am I gonna do?"
I checked my messages, not horroscope, to try and find a clue


There was a message in particular that caught my eye
It said there was a party happening, it was near by
So I got myself dressed and I left my house
Got to the party, nothing stirring, not even a mouse
'bout thirty people were there and most of them were dicks
Only three of them were girls, but they weighed as much as six
photo 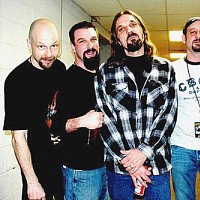