You're Awful, I Love You

Share
I'll tell it like it happened, it was Darius and Noland and me
just a few po' boys trying to get up out of Missouri.
Took 55 Louisiana, stopped by the highway to eat
They both had crawfish, strictly chicken for me
Back out under thunderheads, the radio was Southern soul.
They interrupted Clarence Carter with a strange-ass local show.
They were sayin':


[Chorus]
"Come down to Lake Pontchartrain
Rest your soul and feed your brain
That's where you will get to see everything the water can be."
The rain was comin' down, the wind was howlin' outside of Slidell
It was the kinda night that makes you think the whole world's goin' to hell
We got off on an exit 'cause we couldn't read the map so great
Near the Choctaw Motel, we parked to deliberate
when out of the bayou came a man like the lake had a tounge.
He was right up on the glass, all yellow-eyed, black teeth, bangin' on the windshield
screamin' like a demon at the top of his lungs:
photo 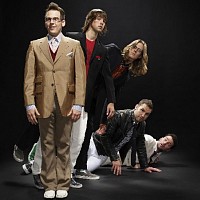 You're Awful, I Love You