I remember it like it was yesterday
Though a thousand suns have passed,
When the men came to my village under a strange sign.
They turned our women into whores, our children into slaves,
And with them came a man who shouted
"By this book, you’ll all be saved!"


Now with the passage of time
Belief in the ancient gods fades,
Corrupted by the followers of the dollar and the cross
The people’s minds are not their own
Heritage taken when seeds are sown
You can’t even pronounce your name!
Have you no idea from whence you came?
Have you forgotten why your forefathers fought and died?
T’was not for money, or the blessings of a man who lied!
Ideals of honour that lurk deep in every beating heart,
Are under attack-By the children of the lie
That the Church has spoken.
photo 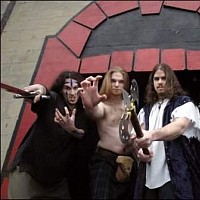 For every maid,
For every child,
For every warrior whose wife has been defiled
If it’s a war they want,
We’ll kill them all!
Under the sign of the horned one they’ll fall!