Coquelicot Asleep In The Poppies: A Variety Of Whimsical Verse

Share
Penelope shoot the apple off my head,
I need to go to the store,
to get some sleep.
Because I've run out of sleep.
The row boat came so David stopped arguing with a mime
and waved his arms like wheat.
But when he tried to speak
the Prince of Plum fell through the roof of his mouth and handed David an envelope.
Inside was a letter
that read "sir, you were given this envelope by mistake please disregard it."


Nicolynn shoot the candle off my head,
I need to go to the store,
to get some beets.
To rub all over my feet.
Andy's joke reminded Gerard
that his sloth balloon was owned by Turkish moths.
Gerard's Lebanese boss had sent him out on business,
giving his word that he would keep it locked in the safe.
But it was all deceit,
cause once he had the sloth balloon
he traded it
to the moths for
a lithograph of "Lady Lamenting On A Lawn Chair".
photos 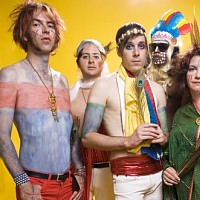 What interested Balabanoba was building complicated French machines designed to better enjoy the duchess,
and she him.
He helps her in the stirrups then he straps himself in,
they spend their days in heights of ecstasy.
But wait,
why then does she look so sad?
Why is her countenance so glum?
Does she tire of mechanical hands,
or is she pining for the fair Prince of Plum?
Lulubird shoot the doorbell off my head,
I need to go to the store,
to get some treats.
For Gothe, Becket and Keates.
The characters of the "Gay Parade" formed a boys choir with Static and the Red King.
But whenever they sing all postal workers simultaneously whisper to themselves the word calendar
calendar...

Lyrics was added by Makasu

Coquelicot Asleep In The Poppies: A Variety Of Whimsical Verse