"So we're down in Brazil and, man, that place is wild.
We're in Rio de Janeiro, and uh, we had this, this sort of, uh,
security-guard type guy, and he was supposed to take us around and said: "Hey,
could, you know, could you take us to the,
the favelas and show us the prostitution and the drug deals and the night fights and the,
you know, the street life of your town", and he said: "Sure", so we, we pull up to this hooker,
and she's wearing some kind of a, a bright green miniskirt, and it turns out it's a transsexual,
and he says: "Get over here!" and she comes over and she thinks she's busted, but she's not busted.
Naw, she's not busted, he just wanted to smack her on the ass a few times and say: "Hey, what's up, girl?" 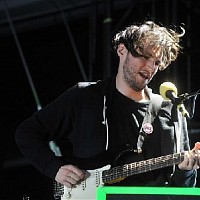 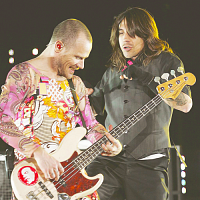 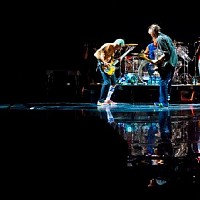 "So I remember we got our driver's license, and my friend Hillel had this little Dodson, painted green, and...
Hollywood would get so crazy in the winter -the rains would come and the hills would just kind of melt down into the city lights,
and, well, you know, we smoked weed and we'd go up in the hills and we'd listen to progressive rock music and just kind of trip out and...
Well, we would dream, you know, we would dream, and we would talk about what we wanted to do, and we would talk about girls and music,
and, you know, Hillel wanted to be a rock star - I didn't even know what that was, I was like: "Whatever you wanna do, man, I'm coming with you.
I'm right with you, my friend!"
Get out of bed and I clear up my head
And I don't want to go but I do it instead
We are dreams within a dream
Get into bed and I turn off my head
And I﻿ started to float, was it something she said:
"We are dreams within a dream"
(La la, la la la la la, la la...)
Why in the world would you want it to be - why would you wanna take it so... so literally?
All these things that come down from the sky, raining upon your head, make you stop and wonder why -ah!
Can't they just spell it out, make it clear, make it easy to read for the simple man like me?
I don't think so...
I reach out to my family and I say
It's not about religion and the God sitting in a chair in the sky with a punishing hand, no
It's about heaven in your heart
Now when can we start?
I wanna choose love instead of fear
Won't you come right now over here and be a part of mine?
Let me make you easier this time
I love you

Lyrics was added by Louis16

Lyrics was corrected by Kwyjibo

Video was added by Louis16