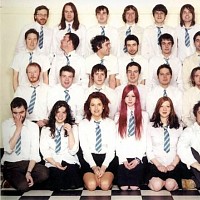 Now the pessimism in me yawns
As I'm pissing on their perfect front lawns
A voice calls out behind my back
And I take off into the grounds
I'm doing Cartwheels
It'll all tie me up into knots
I didn’t mean to speak out of turn.
Now you can sit and watch me squirm
Now the party's really in full swing
I wish I had a friend I could ring
I'm doing Cartwheels
You're really loving this, aren't you dear?
Now you've got me on the ropes out here
With nowhere else to run to now
Just stay and face the music
It'll all tie me up into knots

Lyrics was added by TheEissy