Warrior Witch of Hel
Doomed slave marked for death
Skull ring of the great goddess encase her rotting flesh
Jeweled goblet of blood wine
Floods his tainted form
Half conjured rituals to crush the impending rebellion
Led by a slave who fought her way out
Armed with steel, shield, and axe
Trembling he pours over yellowed scrolls
Remembering that hel laughs last
photo 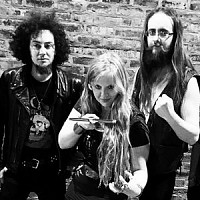 Lyrics was added by Morgoth

Video was added by Morgoth