At first the rumors
spread about the people dying fast
and their body's inflammation
infecting everyone at last.
No sense in hiding while the scourge passed
down the streets
good and bad alike were falling
during death's voracious feast


Like the sound of distant thunder carrying the storm
rang the bells of countless churches, keepers of the
wisdom, of grand illusions to kneel before His throne
while the people's fate just was to work
their hands down to the bone.
They say we're rotten to the core,
our sins now greater than before.
Seven ways for hell's intrusion,
have we lived in vain?
photo 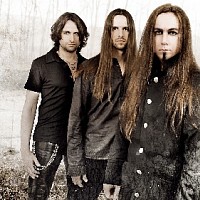 Read what the prophets say
about the end of days
in the book of revelation,
showing Satan's ugly face.
Seems to be the war in heaven's been brought upon this land,
the unholy conjuration, demons of Gehhena,
a final judgement, to purify our souls,
so let us dance among the corpses stacked
around a hunderdfold.

Lyrics was added by Mokee

Video was added by Mokee