Soundtrack - Into The Woods

Into The Woods - Film

Share
Witch: In the past when your mother was with child she developed an unusual appitite! She took one look at MY beautiful
garden and told your father that what she wanted more than anything in the world was-
Greens Green and Nothing but green! Parsley, Peppers, Cabbages, and Celery. Asparagus and Watercress and Fiddlefern and
Lettuce. He said "Alright!" But it wasn't quite cause I caught him in the autumn in my garden one night!
He was robbing me, Raping me.
Rudding through my rutabagga raiding my arugaluga ripping up the Rampion MY CHAMPION MY FAVOITE!
I shoulda layed a spell on him right THERE! Coulda turned him into stone or a dog or chair-eh-eh. *Momentary Trance"
But I let him have the rampion, I'd lots to spare in return however I said fair is fair. You can let me have the baby
that your wife will bare.. And we'll call it square.


Baker: I had a brother?
Witch: NO! But you had a sister.
photo 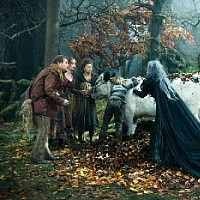 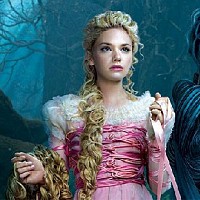 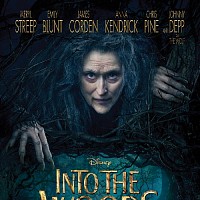 Narator: But the witch refused to tell him anymore of his sister...even that her name was Repunzuel.
Witch: I thought I had been more than reasonable...but how was I to know what your father had also HIDDEN in his pocket!
You see when I had inherited the garden my mother warned me that I would be punished if I were ever to loose any of the
beans.
Baker and Wife: Beans?
Witch: The special beans, I let him go I didn't know he'd stolen my beans! I was watching him crawl back over the wall when
BANG! CRASH! And Lightening Flash- and well that's another story nevermind...
Anyway at last the big day came, I made my claim.
"Oh don't take away the baby!" They shrieked and screached but I did! And I hid her where she'll never be reached! Your
father cried and your mother died. But for extra measure-I admit it was a pleasure- I said "Sorry I'm still not mollified"
and I layed a little spell on them.
You too son!
That your family tree will always be a barren one!
Baker and Wife: No!!!
Witch: So...there's no more fuss and there's no more scenes and my garden thrives! You should see my nectarine! But I'm
telling you the same I tell Kings and Queens don't ever ever ever mess around with my greens! ESPECIALLY THE BEANS!

Lyrics was added by Maila

Into The Woods - Film

Soundtrack - Into The Woods lyrics