Share
ELDER PRICE
You all know the Bible is made of testaments old and new
You've been told it's just those two parts, or only one if you're a Jew
But what if I were to tell you – there's a fresh third part out there
Which was found by a hip new prophet who had a little...Donny Osmond flair?


Have you heard of the All-American prophet?
The blond-haired, blue-eyed voice of God!
He didn't come from the Middle East like those other holy men
No, God's favorite prophet was All-American!
I'm gonna take you back to Biblical times, 1823. An American man named Joe livin' on a farm in the holy land of Rochester, New York!
photo 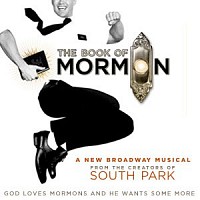 ELDER CUNNINGHAM
You mean the Mormon prophet Joseph Smith?
ELDER PRICE
That's right! That young man spoke to God!
ELDER CUNNINGHAM
He spoke to God?
ELDER PRICE
And God said "Joe, people really need to know
That the Bible isn't two parts, there's a part three to The Bible, Joe!
And I, God, have anointed you to dig up this part three
That's buried by a tree on a hill in your backyard!"
ELDER CUNNINGHAM
Wow! God says go to your backyard and start digging, that makes perfect sense!
ELDER PRICE
Joseph Smith went up on that hill and dug where he was told!
And deep in the ground Joseph found shining plates of gold!
JOSEPH SMITH
What are these golden plates?
Who buried them here and why?
ELDER PRICE
Then appeared an angel: his name was Moroni!
(Ahhhhh...)
MORONI
I am Moroni...
The All-American angel! (All-American!)
My people lived here long, long ago! (So long ago!)
This is a history of my race, please read the words within
We were Jews who met with Christ, but we were All-American!
But don't let anybody see these plates except for you...
They are only for you to see...
Even if people ask you to show the plates to them, don't
Just copy them onto normal paper
Even though this might make them question if the plates are real or not...
This is sort of what God is going for...
ELDER PRICE
Joseph took the plates home and wrote down what he found inside
He turned those plates into a book then he rushed into town and cried:
JOSEPH SMITH
Hey! God spoke to me and gave me this blessed ancient tome
He commanded me to publish it and stick it in ev'ry home
ELDER CUNNINGHAM
Wow! So the Bible is actually a trilogy and the Book of Mormon is Return of the Jedi?! I'm interested!
ELDER PRICE
Now many people didn't BELIEVE the prophet Joseph Smith
They thought he made up this part three that was buried by a tree on the hill in his backyard (Liar!)
But Joe said –
JOSEPH SMITH
This is no lie, I speak to God all the time
And he told me to head west!
So I'll take my part three from the hill with the tree
Feel free if you'd like to come along with me
To the promised land! (The promised land?)
Paradise, on the west coast!
Nothing but fruit and fields as far as the eye can see!
ALL
Have you heard of the All-American prophet?
He found a brand-new book about Jesus Christ!
We're following him to paradise, we call ourselves Mormon
And our new religion is All-American!
ELDER CUNNINGHAM
Wow, how much does it cost?
ELDER PRICE
The Mormons kept on searching for that place to settle down
But every time they thought they found it they got kicked out of town
And even though people wanted to see the golden plates
Joseph never showed 'em!
GOTSWANA
I have maggots in my scrotum
ELDER PRICE
Um, okay. Well, anyway...
Now comes the part of our story that gets a little bit sad
On the way to the promised land, Mormons made people mad
Joseph was shot by an angry mob and knew he'd soon be done:
JOESPH SMITH
You must lead the people now, my good friend Brigham Young
Oh God, why are you letting me die without having me show people the plates?
They'll have no proof I was telling the truth or not
They'll have to believe it just...'cause
Oh...I guess that's kinda what you were going for
Blargggh...
ELDER PRICE
The prophet Joseph Smith died for what he believed in. But his followers, they kept heading west. And Brigham Young led them to paradise. A sparkling land in Utah they called Salt Lake City. And there the Mormons multiplied! And made big Mormon families!! Generation to generation until finally...they made ME!!! And now it's my job to lead you where those early settlers were led long ago!!!
ALL (ELDER CUNNINGHAM)
Have you heard of the All-American prophet? (Kevin Price!)
The next in line to be the voice of God?! (My best friend!)
He's gonna do something incredible and be Joseph Smith again!
'Cause Kevin Price the prophet is all, all, all...
All-American!
(If you order now, we'll also throw in a set of steak knives!)
All-American!

Lyrics was added by Katie085