Share
Fading suddenly in!!! An ultimate red light...
The strong red jewel, it was formed that night...

Covered with 5 bright silver shields with pendants
It was hanging in the air in front of me... 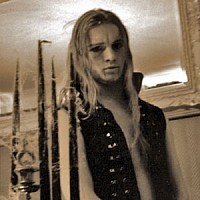 Filling the air with its dead and lost grace
Like a mystical adventure where old courtesy
Paints my face...
No illusion...but a refraction of the reality
When suddenly I meat that face
Like a shadow of an invisible tower
It consecrates! IT CONSECRATES!
A thing with an untouchable glow from the divine
Which is constant with the character of my mind?
For my heart cries as that living spectral
Who knows the dreads and pride I have created
The jewel gave my birth
As the 555 on this earth...
I had seen my kernel of blood in the air
The spectral and jewel...MY OWN SPHERE...!