[Intro]
Together we witness one of the most delightful in our times
So um, let the bass go

[Verse 1]
You've been denied, although you've tried
So I've been having to make you fall like a tide
No disappointment, cause my beat'll soothe like an ointment
Suckers with static approach and get smoked like a joint
Feeling ignites the flame, I mean I burn like a lighter
But with a hip-hop groove cause I'm a writer
The hero or great, take a stand then we'll see
Thee, in chronological order starting with me
A rap introduction, the suckers destruction
Yeah, are all involved when I started conducting
The lyrics are the maximum, I stated for facts in them
Chumps never try to break knowing I'd wax them
Murder in the first degree
Occurs only when dealing with the D-O to the C
I'm like a whirlwind pyramid, and I'm letting you know
I get ill when I hear the bass go
photo 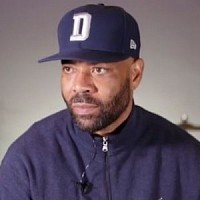 Yeah, that's the sound and you know it's down
But you know why? (Why's that?)
[Verse 2]
Cause I've been around, and you've heard the sound
Of the DOC and the new style that I've found
It's quite unorthodox, but still bass and
Enough to make you dance, so I picked up the pace and
Let it ride like a cyclist
And see it show in the end that I'm the mightiest
And that I'm lyrically inclined to make you want to step to my time
The beat and the cut to this rhyme
Do a show, and I'm good to like a G-O
Never getting skeezed, I mean it's like an N-O
Happiness to me is like a positive cash flow
So I let your ear cold hear when the bass go
(Kick it over here...kick it over here)
(Now I think it's about time) (Feel the beat)
(Drop that) (What?) (bass) (Aight, bet)
[Verse 3]
I don't wanna (stop), cause if I do you might lose it
I made this record for you to jam, so use it
Kill the treble, pump the bass and then
Send the suckers on the block into a tailspin
Roll by, booming like a nuke bomb
I know there's pressure on your ears, but stay calm
After you pass, though, you better turn it down some
Or else you're gonna put a dent into your eardrum
Success relies on the individual
I feel successful when receiving the residual
But as for you, you all should know
When I say "Let's get hype" I'm letting the bass go
Now that's the way it should be done
I know that's on the one
[Verse 4]
And that is fun
To see a sucker standing weary
And girlies on the tip standing near me
The bass was the topic so I dropped it
Added some dope lyrics and then I locked it
On track 24 in a machine
To make you move on the hip-hop scene
Cued up Dre, and I knew that he would know
That on the one, I would let the bass go
Because a dope jam is what I gotta make
I make it rattle cause you love it when it vibrates
The D the O and to the C
Must cause pleasure when showing y'all my ability
To inject on the set mass enjoyment
This is to ensure definite employment
When I hit town, yo, you'll know
Crowds will roar, and you'll hear the bass go
Yeah, let the bass go
This is most definitely down with my homeboy DJ Speed
Is that on track?
Word em up, peace