Share
Bombs going off in Sierra Leone
Taken more shots than Karl Malone
Battle looms, your doom, injustice entombed
Who got the diamonds? Who gonna find them?
Who gonna mine them, when the time comes?
Diamonds and Guns, Diamonds and Guns. 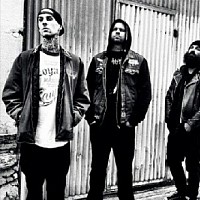 I shot in heaven, now I cry
No one lives forever, in fact we all die
From those who bust shots to those who stuff cops
To those who serve rocks on all the hard blocks
Every last soul must pay the last toll
In the dice game of life, who gets the last roll?
Is it the one with the suit? The one with the sack?
The one who hides behind his fuckin' gun and his badge?
Negative outlook? Well that's how I'm livin'
And like he said, it's a wicked world we live in
It's a wicked world we live in
I'm wiggin out, flippin' out, heart is what I'm rippin' out
I'm slippin' out, I'm dippin' out, killin's what I'm livin' out
Victim, let me pick 'em out, spin and let me whip it out
Gat to your face with the fuckin' bullets stickin' out
Missin' out, disimboaul, blood's what you're pissin' out
84 I'm Crazy Horse, shootin' up, I'm illin' out
Rippin' out, I'm trippin' out, different now, I'm pimpin' out
Any color at my belt and ouch while they're clippin out
Criminal I'm hittin' out, in L.A. no gettin' out
2 1 3, pack your P, fly wicked style
Listen now, I'm sinnin' out, a 6-pack I'm sippin' out HA HA HA
[Chorus]
Yo, representin O-town
2002 baby transplants
1, HA HA HA

Lyrics was added by LRyuzaki