It's cold but the smelting furnace burns hot
Women so warm and so clean
Dreaming while waiting for the hearth
Mire - lakes, dig the dirt
Have the boats find the ore
photo 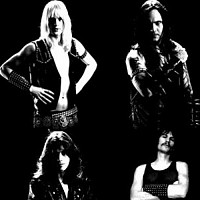 The smoke lies thick over the trees
You'll see it from the hills
Clean out areas and giant slag heaps
Cause of the mine shafts and blast furnaces
To our land came new skills
They brake the stone the german master miners
Fire, water and the powers of men, grind the stone
Hansa's strong
And we don't belong
Iron can't be sold
And the king steals our gold
Swedish iron so strong and so black
Gave foreign kingdoms the thrills
And the roads were closed for export
Erik the king sent men of the beaten track
With the tarmans bills and with violent force to extort
Sire, porter and the jacks of usury
Your time is up, prepare for war
Hail to Engelbrekt, the king is abject
The castles has burned, burn