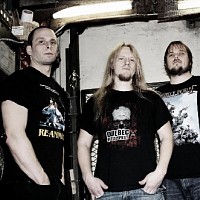 The hand strikes with deadly force
A massacre is unleashed
Every man should run and hide
The killer's put a price on you
Civilians pay for a tyrant's insecurity
For he feels his power slip away
Mobilization with hostile intention
Taking a piss on the Geneva Convention
(Chorus)
HATE (hate) it powers the world
FEAR (fear) is part of their game
DEATH (death) is the reason we live (so get busy dying)
Players and puppets in a sickening play
Russian roulette will splatter your brain
I won't be asking for forgiveness
You try to wipe me out
Now I'll take you down
Everyday you crawl through life... I'll show you why
Lies (lies) Pathetic fucking lies
You've reached the day of your decline
A path to disintegration is clearly set
Now it's up to us to take the first step
(Chorus)
solo: