A shadow strikes in the absence of light
And molds the terror into insanity
Hands claw at familiar faces - running from the unknown
Is there now something real?
Resist the unseen - the obscure
Resist the panic - painful foreshadowing
Destroy yourself - inflicted apprehension
Awaken subconscious to the primal fear!
photo 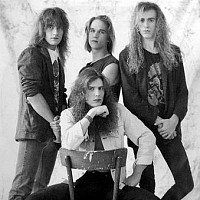