Deceived and tortured
On the wheels of massive thrill
Your mind is splattered by the constant flowing dead... disarm 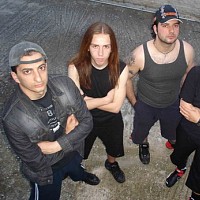 The burning seasons
Still awake when soul defends
It's fired conceptions to the final counterblow... react
IT'S HOY BLOODBATH, GODLESS RAGES, SOLEMN TIME THEY STAND
THE CYNIC SMILE ON THEIR FACES TO HARD UNDERSTAND
I SEE THE FLAME IT'S BURNING DOWN THE SHADES OF BLACK EMPIRE
YOUR BURNING stigma and a liquid act of flesh divine