He's done dirty deeds through all these years
And now he is chasing away the fears
Is it too late to realize?
His soul is condemned to burn in...
Hell, fire below the fall of mankind
A burning soul a life so lost
Though he fights to take control
photo 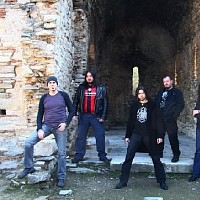 [Chorus:]
Days, all full of sins and destruction
Years, filled with abnormal reactions
Sights, man could have never feared of
Saint or a sinner, the same lost soul
Praying as he kneels down to the ground
It's time to say clear the things he's done
Hoping for one more given chance
To clean his soul from all of these
But he has already lost his way
And now there is no escaping
Torture and pain from now on
His soul is condemned to burn in...
Weeping and crying oh!!
He lusts for more and now
Is it too late for him, for resurrection?
His conscience ash to ash his body dust to dust
His soul will never be free again