Hard were the times and cruel was the price
To pay to survive in this dark age
And so blew the deep battle horns
The sharp iron drank blood without rest
They fought as the lions, against the hungry dogs
They died like men, on the blood stained snow
photo 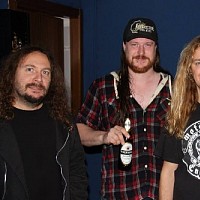 In the fury of battle born a son of king
"Victory" was written on the book of doom
His father gave him a mighty sword
And told him: "You always trust in this faithful steel"
When he grew strong as the storm
He went through the world thirsty for vengeance
Until he found the wicked man
And the strong wind of death blew again
They fought as the lions, against the hungry dogs
He won like a hero, on the blood stained stone